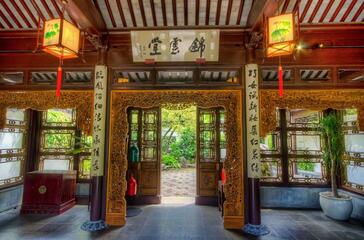 The written word and poetic couplets are an integral part of Chinese classical gardens.  They often define a space and sometimes spell out its feeling and use.  Not infrequently, they may make discrete references to classical literature.  Historic and poetic context may be used to engage the mind, just as the forms around may play upon the senses.  Rocks, trees, and flowers may seem incomplete without a touch of poetry that adds to a scene.  Our artist-docent Frances shares her respect and love for the calligraphy and poetry of two scenic areas in the Garden—the Moon Locking Pavilion and the Hall of Brocade Clouds. 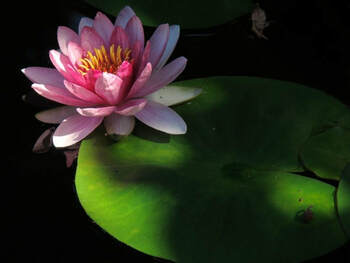 Author of Married to My Garden and Garden Retreats, professional horticulturist and fellow gardener Barbara Blossum Ashmun shares her thoughts on the special qualities of our Lan Su Garden that set it apart from others in fostering peace of mind during stressful times, and why the Chinese Garden brings about tranquility for so many.  She presents a slide show of Garden Retreats: Creating an Outdoor Sanctuary with a special focus on the elements of Lansuyuan which contribute towards that goal. 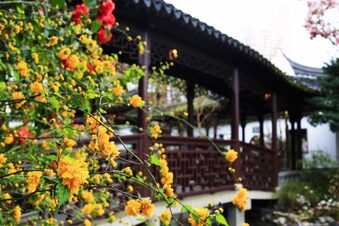 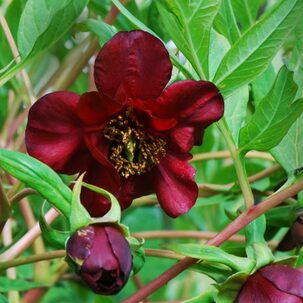 "Delavayi" A French Connection in
​Lansuyuan and in My Garden
Megan Esler
January 5, 2008
While the greatest number of plant species in Lansuyuan originated in China, the introduction of so many of them came by way of enthusiastic botanists visiting or living in China.  This is frequently reflected in the species names which we often find difficult to remember, let alone pronounce.  Through several Catholic priests on missionary work in China, such as Jean Marie Delavay, thousands of plant species, previously unknown to Western science, were discovered.  Many of them have added tremendous joy to Megan Esler’s garden and can now be found in our Garden.  Megan, a member of the initial core group of docents, will share her knowledge and special interest in the plants with “Delavayi” in their name.  Learn about this wonderful and often overlooked French connection. 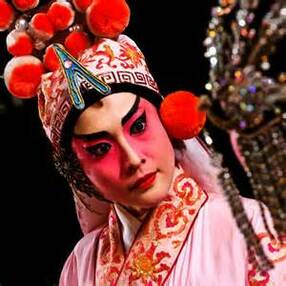 ﻿Chinese Opera in Portland
Mary Leong
March 1, 2008
​
Chinese opera, together with Greek tragic-comedy and Indian Sanskrit Opera, comprise the three oldest dramatic art forms in the world.  One of the earliest forms of Chinese opera, Canjun opera, goes back to the Three Kingdoms period.  Since that beginning, Chinese opera has evolved into over 300 regional opera styles.  During the Tang Dynasty, Emperor Taizong established an opera school with the poetic name, Liyuan, or Pear Garden.  To this day, operatic professionals are still referred to as “Disciples of the Pear Garden.”  Mary Leong, a fourth generation Chinese resident of Portland, introduces us to Chinese Opera in Portland.  She reminisces about the plots, costumes, makeup, colors, dances, acrobatics, and the distinctive dialectical music unique to the Chinese opera. 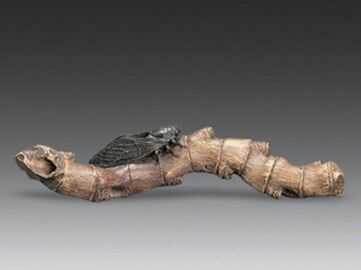 Yixing Ware
"Mysterious and Beautiful”
​and A Practicum: “Creating A Scholar Brush Rest”
Anne Perrigo
May 3, 2008

To begin to fully appreciate a Chinese scholar’s study, one needs to learn of the “literati arts of China,” and cultivate a sensibility for the Chinese scholars’ taste and aesthetics.  How can this aesthetic best be accomplished?  Perhaps through discussion, and the examination of typical artifacts found on a scholar’s desk or in the study.  This would be akin to the selection of written words and poetic couplets in a scholar’s garden, which are employed to engage the mind and help define a space or to suggest a feeling and use of that space.  To begin this journey, Anne Perrigo introduces us to Yixing Ware and why it is often associated with the aesthetics of Chinese scholars.  Anne leads a practicum with clay so volunteers can create a brush rest or stand that might be found as a scholar’s desk object. 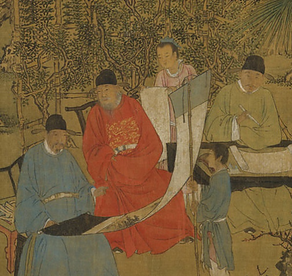 In order to develop a greater understanding and appreciation of the Garden’s Scholar’s Study (Hall of Permeating Fragrance), we need to learn about the person who could have occupied the facility, and how it would be furnished and used in keeping with the ideals of a unique literati culture that emerged during the late Ming and early Ching dynasties.  In approaching this study, which is not without complexities, this presentation focuses on the sensibilities of the literati culture, which is characterized by intelligence, inner virtues, eremitism, and elegance.  What were the qualifications to belonging to such an elite, close-knit society?  To help us reflect on this culture, we will take a look at the Four Treasures and the connoisseurship which populated a Scholar’s Studio, revealing another layer of a Chinese gentleman-scholar’s garden.